The art offerings of the Nordics are well established: from the capitals’ gleaming national galleries to the scrappier artist-run spaces in their less-polished neighborhoods. But travel away from the established centres and you may stumble upon some of the region’s most visually arresting art sites. In each of the following three art escapes, in Norway, Sweden and Denmark, a unique alchemy fuses the site with the place in which it sits, and together they yield something almost magical.

For volume nine of Oak – The Nordic Journal, I wrote about the Steilneset Memorial (above) in Norway, Artipelag in Sweden, and Cisternerne in Denmark. 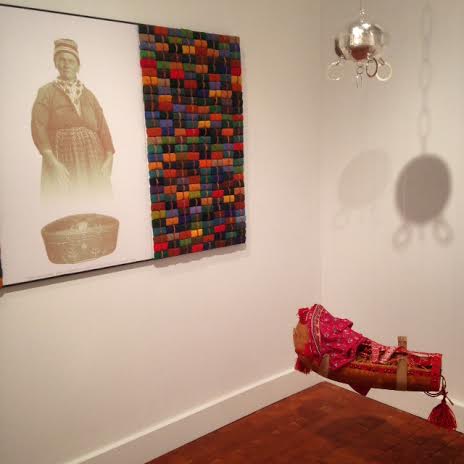 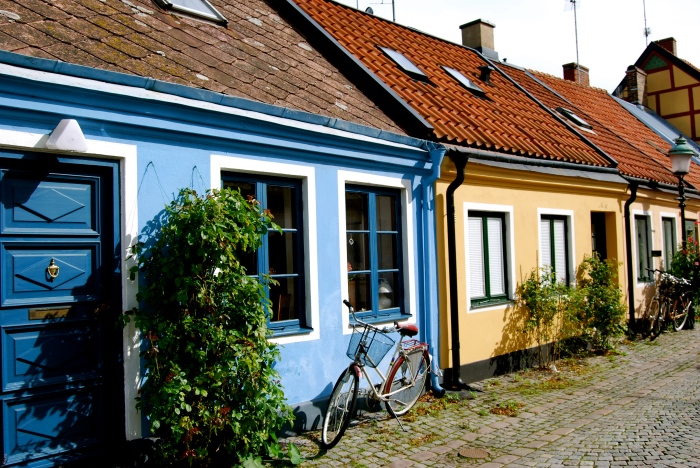 This month’s Travel and Leisure caught on to the Nordic Noir trend with a piece that offers a guide to the sites associated with Stieg Larsson’s Millennium trilogy. Rather than the usual ponderings over why such as nice, clean, picturesque country like Sweden produces works of grisly crime fiction, the piece, written by Reggie Nadelson (who impressively manages to plug his own most recent book mid-way) digs into the geographical isolation of Stockholm’s new immigrants, as well as the geographical division of the classes and corresponding smouldering suspicion and resentment. One peeve, though: describing Sweden as a country of “frozen emotions” is just annoying.

I have always favored Henning Mankell over Stieg Larsson. With all his talk of “men who hate women,” Larsson tries just a little too hard to be a “good guy” for my tastes, and his hero Mikael Blomkvist’s irresistibility to women is frankly tiresome.

I never bothered with any of the Millennium related sites in Stockholm, but when I went to Ystad you bet I tracked down Mankell’s fictional inspector, Kurt Wallander.

— Special Wallander Cake (decorated in the colors of the Swedish police force) at Fridolfs Konditorei in Ystad. The cafe freqently appears in Mankell’s books as the place where Wallander get his usual herring sandwich.

Cafes are ubiquitous in Ystad, as are various media detailing where you can retrace Wallander’s footsteps.

When I made my first greeting this morning it took a moment to arrive at the word. Tere. Hello.

Tere. It is a gentle sound, a soft way of entering into someone’s awareness. It is a word as warm and gentle as I had found the Estonian people themselves. 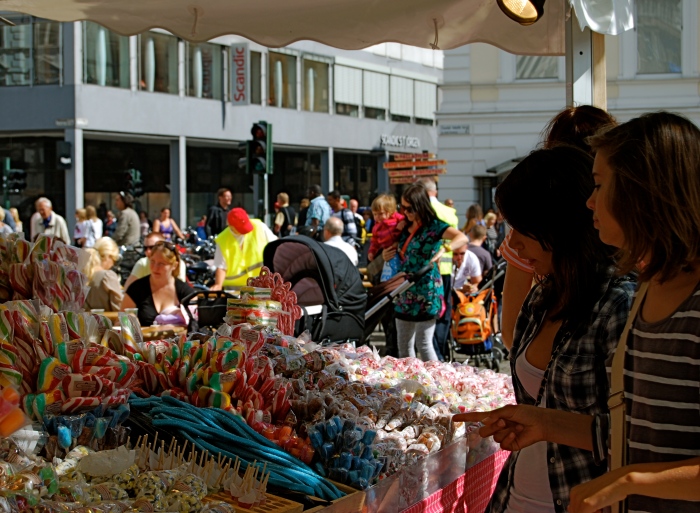 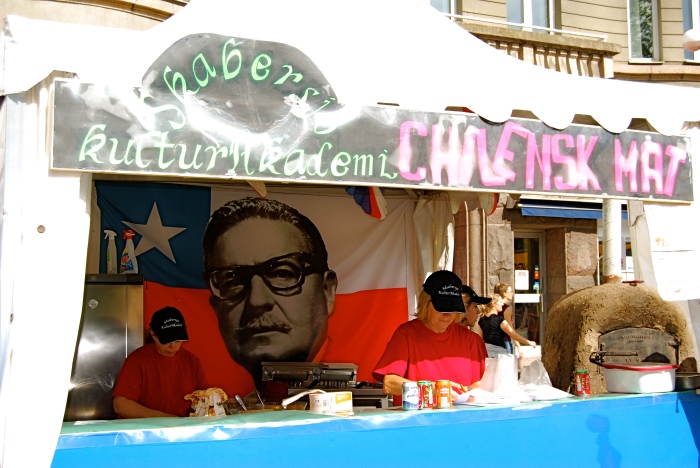 I was quite willing to go along with my friend’s idea to visit some sculptures buried in the depths of a forest in southern Sweden, but as I stubbed my toe against the thick root of a tree and fell head first into the damp earth, I had to question what kind of artist would decide that this was a good place for a project. But then again, other people’s opinions don’t seem to be of much concern to the artist Lars Vilks.

Lars Vilks is better known for his ability to produce art offensive enough that it earns him death threats and a bounty of $100,000 on his head, than for creating sculptures from salvaged materials in a Swedish nature reserve.

Mr. Vilks—a former art professor—submitted three drawings to a 2007 exhibition on the theme “The Dog in Art.” Vilks’ pieces depicted the prophet Muhammed as a roundabout dog—a form of street installation popular in Sweden at the time. The drawings provoked accusations of blasphemy, debates about free speech, a burning of the Swedish flag in Lahore and threats of murder.

Before he became embroiled in international controversy, Lars Vilks was just an eccentric artist who, in 1996, had declared the founding of a micro-nation in Sweden’s Kullaberg Nature Reserve.

In 1980 Vilks built two art pieces in the reserve in Skåne. He made Nimis from 75 tons of driftwood and Arx from stone. The local council discovered them two years later and, saying that building within a nature reserve was illegal, demanded their removal.

After losing appeals against the council’s decision, Vilks retaliated by declaring the square kilometer of land where the sculptures were located to be the newly founded independent nation of Ladonia.

While no one actually lives in Ladonia, there are 14,000 Ladonian citizens. You can become one too just by filing out an application—nobility costs extra. Ladonia has its own ministry, royal family, flag, currency, postal service and two national anthems. It’s all done a little tongue-in-cheek, but, when in 2002, 3000 Pakistanis applied for immigrant status, asking Vilks for the address of Ladonia’s embassy and how to get there, it became apparent that not everyone was in on the joke.

Our own journey to Ladonia takes us through the seaside resort of Mölle and little town of Arild, whose residents’ almost foreign sounding Swedish dialect seems like preparation for our departure from the nation. We pull up by a lonely maypole in the Kullaberg Nature Reserve and begin our trek.

Since Ladonia is not officially recognized, it does not appear on maps. The only way to find your way through the woods is by following yellow arrows painted on the trees.

True to form, these haphazard signs are misleading—perhaps intentionally. The first one we see has 1.2 km painted underneath, so we are frustrated when, after walking for at least 15 minutes, we come across the next arrow and it says 1.1 km.

It carries on like this and we try to suppress thoughts of giving up by saying that we should have expected this; this place doesn’t really exist anyway. We carry on, and it begins to feel like a hike. The arrows point us up hills, over rocks and through clusters of thick, inflexible branches. The climb is becoming slippery in my flip-flops—I hadn’t dressed for a hike. The sun is still strong, even in the early evening, and I feel my shirt start to dampen with sweat. We keep climbing.

And then there it is. Stretched out in front of us is a tunnel made out of wooden pieces. It dips down and stretches as far as the seafront where the centerpiece stands at the shore: the great sculptures of Nimis.

We walk through the piece, tottering unsteadily over thick sticks nailed together to form an almost labyrinthine walkway. Rogue nails that have worked their way out of the wood point at my feet—bare now to make walking easier—so I try to keep my eyes turned down. But I can’t help but look around at this place: Ladonia, this empty, fantastical nation.

The tunnel spits us out by the shore, and it is just the two of us—just two inhabitants of an entire nation. We each choose a rock to sit quietly on; the only sound is the waves lapping the rocky beach. My breath settles and I feel the peace that comes with the absence of anything anchoring me to a tangible place. There is something impossible about sitting here in a conceptual nation, under a sun that still burns late in the evening, having walked through a nation that is an art piece, that is not even supposed to exist. I am neither here nor there. Nimis.

I don’t know how much time has passed, but in the distance I can hear voices. Sweden is encroaching on Ladonia. Taking this as our cue, we start the walk back. We pass the new arrivals on our way. For now this nation belongs to them.

Mölle is off the coastal highway 111. The nearest airport is Ängelholm, approximately 19 kilometers (12 miles) away. Mölle is 35 kilometers (22 miles) northwest of Helsingborg and around a two-hour journey from either Copenhagen or Malmö.

You can only reach Nimis by foot. The path begins at Himmelstorp—a preserved farmhouse—and walkers are guided by a series of yellow ‘N’s painted on tree trunks and fences.

Ladonia is a micronation within a Swedish nature reserve, founded by the artist Lars Vilks to house his two sculptures–Nimis and Arx–that had been declared illegal by the local council.

To get there, you have to travel to the Kullaberg Nature Reserve, close to the seaside town of Mölle. We got out of the car by a lonely Maypole.

Then found the path to the micronation Ladonia and the sculptures of Nimis and Arx by following yellow arrows painted on fences and trees.

The path was steep, rocky and the distances marked on fences were misleading. Eventually we entered and walked through the sculpture itself, down to the shore.

The rain finally cleared and my cold finally gave me a bit of a break, so we got out and into Stockholm and the sun brightened it all up for us.  The city which looked so menacing yesterday under heavy, dark clouds seemed so lighthearted and fun today.

We took one of those “hop-on, hop-off” boat tours around and through the islands, wandered through several ages of Sweden and a world of animals at Skansen; bypassed an event celebrated a round-the-world yacht race, and ended up in Gamla Stan again. But like I say, so much prettier today.

It rained from before we arrived until after we left. It did not stop raining. I got a cold. The rain made my cold worse. I was miserable. We lined up by the stage to wait and our feet sank into the mud as the announcer told us she was not coming on for another half hour.
Then she arrived and it was worth all of it. Fever Ray’s performance at the Where the Action is Festival in Stockholm on Saturday night was spellbinding: costumes out of a child’s story-book, vocal pitches that varied from sweet and child-like to threatening and monstrous and a dreamy laser you could lose yourself in.