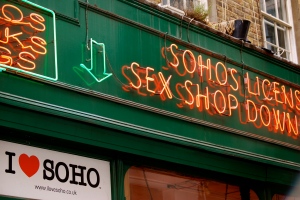 The only thing that comes as close to good as calling London my home is returning to London and slipping back in as if I’d never been away.

I arrived back last week, sat in my beloved Patisserie Valerie on Soho’s Old Compton Street and began listing what it is about London, why this place is so much more immediate than other cities–sucking me in without hesitation.

I love it the moment when the tube doors gasp and suck closed; when the train picks up speed and my thoughts get left behind as we whoosh along the tracks. Nothing has to be done on the tube; I’m just going, not doing.

I like pushing out into, along and finally through the crowds, thoughts focused only on  movement.

I love that its OK to look down, never making eye contact. In London I can slip in and out and nobody bats an eyelid.

I love the fierce ambition and the casual successes. Names tossed off in converstation; places I grew up seeing on TV just backdrops to my own drama.

I love the flashes of hate: brief moments that are stoked with a glare or crossed words, but leave the memory as soon as they do the body. There’s no need for apologies but no grudges either. We just keep moving.

I love how handsome the men are on Old Compton Street–gym hardened bodies that are trained to keep up–and the film company runner that dash through Soho with one eye on the next step up the ladder. I love how every single woman has her own style–I don’t think any other city can compete with London women’s fashion.

The languages: Polish layered over Italian, French, Japanese, Arabic… but I still just love hearing cockney from the old ladies in Hackney.

The choice: Before my eye has left one shop window, the next is already flirting with me. There is nothing I couldn’t find in London.

But what I love most is that every street I walk down holds an individual memory. I might be anonymous to London, but not so she to me.

I have to confess to being absent for too long when I find out, a year late, that an old friend has written and published a book about the place where we met.

Bernie disappeared from my life years ago and re-entered it last night while doing a curious search for an old workplace, The Groucho Club. I came across an article in the Independent that talked of his book and himself, The Prince of Soho, as Stephen Fry christened him.

I worked at the Groucho Club during the last semester of university and the following summer, autumn and early winter of despair and loss of comprehension of what exactly it was I was supposed to do next. I moved slowly through the club, night after night, a nobody in a crowd full of ‘somebodies.’

Only members could visit the Groucho. It is a legendary joint, created for the brightest of the British arts and media world. Celebrities roamed without fear of being papped and egos were allowed to run free, unchallenged. On any given night, any given member could either think me wholly invisible or there to be recruited into listening to their megalomaniacal ramblings. It was only an old American Beat writer that sat at the bar and listened to me talk.

At the time of my tenure, those same young artists would grumble about the direction their club was taking. Since being bought out by a big businessman with a significant surname and an Eton schooling, the Groucho’s membership list had bloated, allowing in the Fat Cats of which Mr. X was surely an acquaintance. Money, not art or integrity was beginning to set the barometer for membership.

Last night, while searching for long-lost threads to the Groucho and accidently stumbling upon Bernie’s book, I saw how this had set a precedent for what was about to come in Soho, that “territory of anti-romance, a demi-monde of chancers, drunkards, crooks, degenerates and tarts with hearts of solid flint.” As the Independent’s piece describes it. The Colony Room—more secretive than the Groucho and arguably more authentic—had closed down, from what I gather, to make way for a block of luxury flats.