The entrance, on Isabela la Católica, to Downtown Mexico. The hotel, a Grupo Habita property, is housed in a 17th-century palace and offers a budget hostel option as well as the boutique hotel.

When I stayed there: September 2012

Eating and Drinking: Two courtyard restaurants (including Azul Histórico) and a rooftop bar.

“It gets into your system … the force and power of nonviolence.”

The above quotation is taken from a Guernica essay by Eamon Kircher Allen that was published in April this year. In April I had just returned from Egypt and was about to embark on a summer course through the International Center for Nonviolent Conflict. The power of nonviolence was in my system.

Through taking the course and talking to young Egyptian activists,  long-held understandings shifted. I started to realise things that should have been obvious. Authority, global order: these things are not rigid. Oppression draws power through our consent; we can withdraw that consent. Nonviolence does not mean inaction: it is often strategic.

In the ICNC course I learned a lot about strategy; about movements from West Papua to Burma and Chile; about different terms used for nonviolence (Satyagraha, People Power..) I learned about creative resistance (the Estonian Singing Revolution, Burmese clowns, Chilean cueca sola…)

As I moved through the year and from this place to the next I saw signs of dissent; civil resistance, and what Kircher Allen called the “common font of yearning for an alternative global order.” From Egypt to Mexico and the USA I saw people struggle for rights, recognition and to strategise a commitment to nonviolence.

There is some nuances I still debate. Such as the photograph below.

It is a stencil of Mubarak and (what I am told is) writing that says “when will he die?” I saw others (that I didn’t photograph) of his image in a noose. I believe that words can be violence so do those images have a place in a nonviolent movement?

What about the destruction of property? Below is a photograph of the burned-out NDP building in Cairo. My first glance at it inspired an initial feeling of horror, which lifted when a woman smiling and taking photos of it expressed to me how happy the sight made her.

A question posed in the ICNC course: If property destruction is violence then how should we think of the Danish Resistance blowing up Nazi railroad tracks?

I am learning and I am asking myself questions and I don’t understand much but I am trying. I still struggle with hopelessness and anger but I am trying to be an optimist. There is both optimism and despair in dissent but signs of nonviolent dissent give me hope. I think that is a good way to move into the new year. 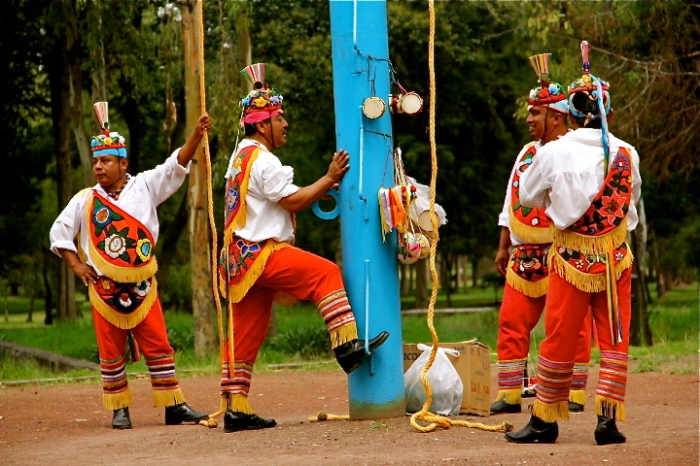 The Voladores de Papantla at the Museo Nacional de Antropología.

The ceremony of the voladores de papantla comes from Veracruz and dates back to the precolonial era.

The ritual begins with five men circling a 30-foot pole.

The men then begin to climb the pole.

One stays at the bottom (he collects tips).

At the top, they all get into position on a rotating platform.

The platform spins and the voladores launch themselves off. 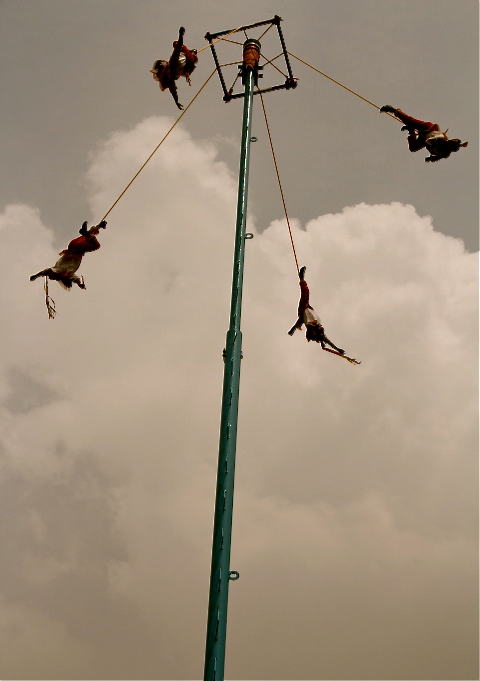 The  musician continues to play his pipe.

Each volador spins upside down around the pole for 13 times — for a total of 52 rotations, to signify the number of years in the Mesoamerican calendar cycle.

All photographs by author. 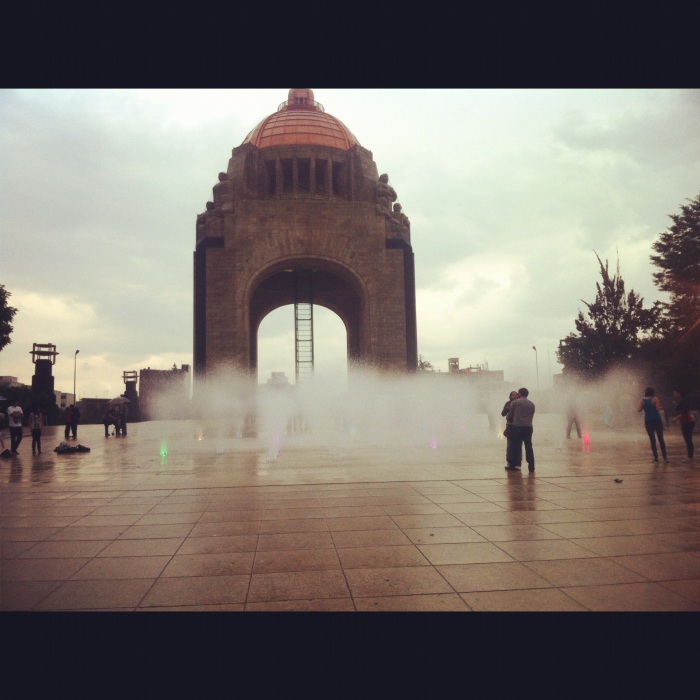 Traditionally you visit Mexico City for the Diego Rivera murals. I tried, but kept failing to find the Palacio Nacional open (it was fiestas patrias week). Instead I caught a few, more contemporary, artworks left over from Spring’s All City Canvas street art festival.

Dissent, it seemed to me, is a cornerstone of life in Mexico City — and for good reason. Although the presidential elections are several months past, there remains much agitation.

Another cornerstone of life in Mexico City ….

Vibrant colours (and music) everywhere is one of the many reasons I fell hard for this city.

From the moment I arrived until the moment I left fiestas patrias — for the dia de independencia — were in swing.

While I have done  a bit of traveling in the last few years, my trip to Mexico City was, according to the following rules, my first vacation for quite a while: I didn’t go to work, I didn’t go under the obligation of visiting anyone, and I didn’t go with the intention of setting up home.

My choice of vacation spot had not impressed one of the doctors at my work. “Mexico City? That’s not relaxing!” She said. Where some may find relaxation on the beach, I find boredom easily. I travel to not be bored; I travel to find new stuff; to learn, and to collect memories.

These are just a few of my favourites from one week in Mexico.

Frida Kahlo is all over D.F: the city where she was born and died. And of every place you see her image, none is so significant as that of the Casa Azul, where her life began and ended.

Pre-Columbian sculptures and Communist memorabilia is scattered through the house, as well as items intensely personal — her corset, her bed, her kitchen — and functional — her easel and paintbrushes.

I felt a special atmosphere here, as if her spirit lingered in her timeless collection of items — of memories left behind. Each of those items tell a story and guided me through the house and through Frida’s life.

I was fortunate to travel to Mexico City with Julie, a writer whose mind, energy and professionalism I admire and envy. Julie had an article commissioned about Martha Ortiz Chapa, owner and executive of Dulce Patria in the Polanco district, and I got to tag along.

Martha delighted me with her talks about her passion for the femininity and sensuality of Mexican cuisine, as well as her love of literature and opera. I adored her. We got to sample Dulce Patria’s current menu — the menu changes monthly, and in September reflected el mes patrio (the patriotic month) — which included chiles en nogada, a traditional dish of poblano chile filled with shredded meat, fruit and spices, and topped with a walnut-based cream sauce and pomegranate seeds. Together the chile, cream and pomegranate seeds form the colours of the Mexican flag.

We had a dessert of rice pudding.

Then after dessert came the alegrías, small Mexican sweets presented on a tray under a spinning wooden airplane toy.

I can’t miss mentioning the expression of powerful femininity in Dulce Patria’s logo.

I’m not sure whether or not the novelty of la lucha wears off after the first visit or two, so if it does, I am especially grateful to Julie for taking me along to the Arena Mexico on a Tuesday evening to watch grown men in spandex, disguised with masks and ridiculous names, throw each other around and out of a wrestling ring, posture, and kick each other in the balls. I was hugely entertained; by the luchadores as much as the passionate crowd members who screamed and cursed, and by the awkward looking bikini-clad card girls.

It was entirely by accident, but I found myself in Mexico City for the Independence Day celebrations of September 15th. The week leading up to the big day had been a treat; seeing flags hung from so many buildings, novelty costumes, hats and Zapata-esque moustaches on sale on every street corner, and bakery window displays stacked high with patriotic cakes.

A couple of days prior, Julie had an interview with Miguel Angel Escobar Ramirez, Food and Beverage Manager of Hotel Camino Real by the airport, for a Fox News Latino article. Escobar shared with us some interesting insight into the depth of preparation involved in putting on an Independence Day party. The three most important ingredients, he told us, are decorations, music and food — as you can see from the photo, he supplied the decorations and food … as well as what must be the fourth: the tequila.

And so to the day itself. The number of people in traditional costume or moustaches, or with green, red and white-painted cheeks steadily increased throughout the day and culminated with a gathering of thousands, in the zocalo (main square) in the evening. What a shame to watch as so many beautifully put together outfits, hairstyles, and face paintings got drenched in a torrential downpour that didn’t let up until the early morning. The vendors selling inelegant ponchos, however, had a great night of sales.

We all stood together, in ponchos, squatting under the umbrellas of strangers, in the rain watching Jenni Rivera (a glamorous Mexican-American singer who exuded glamour even while pulling her soaking wet hair off her face and wiping away her running mascara) until at 11 p.m. President Calderon marched to the Palacio Nacional balcony to repeat the “Grito de Dolores,” a call to arms made by Miguel Hidalgo in 1810 that began the struggle for independence from Spain, finally achieved in 1821.

I am no Calderon fan, but his grito (the last of his presidency) gave me goosebumps. As he repeated the names of the heroes of Mexico in a call and response with the crowd crying “Viva!” after each, I choked. It was a heartrending, precious experience I would love to repeat some day.

I fight the dissolution of these memories as I go back to my normal life; I want to hold on to them forever. I take a moment to stop and close my eyes so that I can envision the green, white and red patriotic decorations scattered around the city, hung from balconies and draped across shoulders. I imagine that I can smell chiles, hear the musical pitch of street vendors and taste thick, sweet atole.

Deep underneath the sensations of Latin America is a twisting regret. I could live here, I think to myself  and I am reminded of the one year that I did. When I lived in Chile I was young and desperately missed a boyfriend I had left back in London. I had arrived in Valparaiso in August of 2001 and immediately began to count down the days, weeks, months until I would return to London. It is with a knot of shame that I try to avoid acknowledging that my time there was not as well spent as it could have been. I had a head full of London. The rhythm of Latin America, that I now romanticise, was too unchic; it stuttered and started where London’s had effortlessly flowed. I had an eating disorder and planned my days around trips to the gym and stared down the little bites of cookies and chocolates that came, without fail, with my espresso or cortado (cortados only occasionally, though: imagine the calories in the steamed milk!)

I travelled far and wide; from Iquique to Tierra del Fuego to Rio de Janeiro and to Montevideo. I accumulated books, knowledge, friends and modismos. I threw myself deep into the places I only passed through. I was enormously happy when I was moving, yet living in Valparaiso, which was travel without traveling, was a rhythm of which I delayed in catching the groove.

After a while I stopped counting down the days until I left and began to settle into my life in Chile. But, still, I regret that I was never as fully engaged with Chile as I could have, should have been.

Perhaps that is why I hold so tightly on to my memories of my all-too-brief visit to Mexico City.