Finnish-born, Amsterdam-based graphic artist Kustaa Saksi creates abstract, dream-like, and fantastical illustrations that, as well as gracing gallery walls across the world, have been featured in campaigns for brands such as Nike, Lacoste, and Issey Miyake. His work has appeared in the pages of the New York Times and even on the stamps of the Finnish Post. Saksi has also worked with one of my favorite ambient (similarly dreamy) Finnish bands, Husky Rescue, and the two came together last week to open Saksi’s latest exhibition, Hypnopompic, a collection of large textiles made of mohair and alpaca wool, cotton, and synthetic materials such as phosphate and metallic acrylic thread, that are created using the jacquard weaving technique. 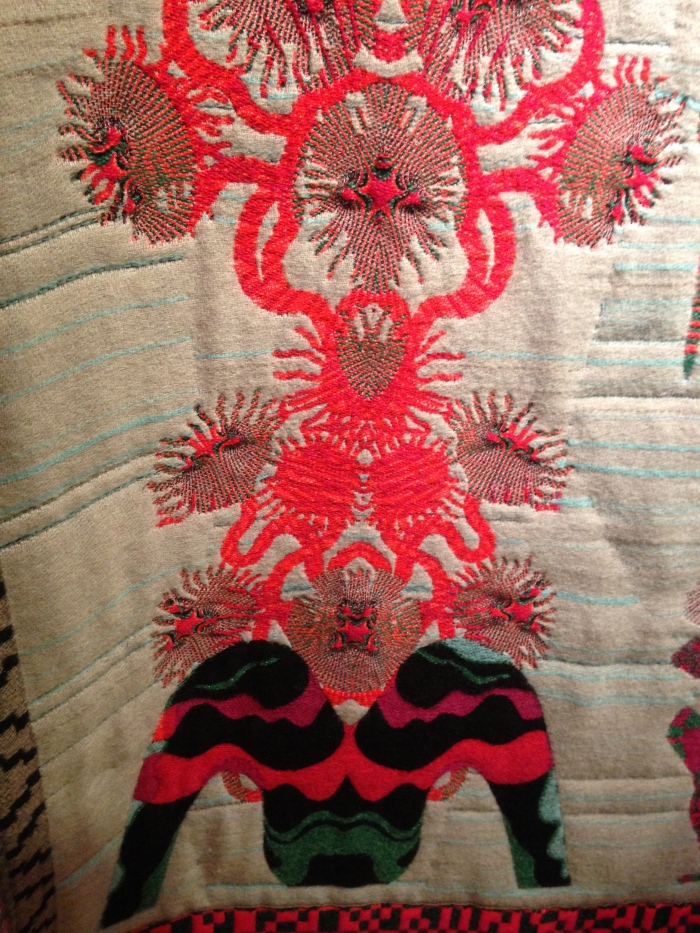 The title of the exhibition refers to the sensory confusion of being between the two states of sleep and wake, when the senses  the dream world blur into a surreal reality. It is a state that is also attributed to delusions caused by severe headaches, and the artist cites his chronic migraines as a chief source of inspiration for the exhibit.

In this Hypnopompic state, one may experience the presence of, or see, creatures such as spiders, monkeys and insects; these images, as well as abstract landscapes, take on a major presence in Saksi’s work. Underlying the surrealist, and at times quite frightening visions, there is a folksy, and naturally North European, feel to his tapestries — undoubtedly helped along by the medium itself.

Toward the end of the evening on both night’s of Saksi’s two-night residency at Artifact gallery, Husky Rescue played a set in the downstairs space. The band’s musical direction has changed a little since I first discovered them while visiting Helsinki in 2010, just after they’d released Ship of Light, moving from a wide cinematic, country tinged, sound to something more stripped down, ambient, and a touch claustrophobic. The sound, and images projected onto and behind the musicians, perfectly complemented the dreamlike visuals in the gallery upstairs. You can listen to the music they created for the exhibition at their Soundcloud page.