.. Is the title not only of one of my favourite Bowie albums, but also a Nomadic Art Happening taking place across the United States this month — kicking off in Brooklyn last night.

Multimedia artist, Doug Aitken somehow convinced Amtrak to loan him a train that, adorned with multi-coloured LED panels and loaded with artists, will travel cross-country. From Pittsburgh tomorrow night and on to Chicago, Minneapolis, Santa Fe, Winslow, Barstow, Los Angeles, and finishing up in Oakland on September 28th.

At each stop along the way, an event is hosted inside old train stations, and a in a vintage drive-in movie theatre in Barstow. The multi disciplinary events will feature performances from the likes of Patti Smith, Thurston Moore, Beck, Cat Power, Savages and Eleanor Friedberger, as well as art by Kenneth Anger, Urs Fischer, Ernesto Neto, and Carsten Höller.

Last night’s event at the Riverfront Studios in Williamsburg began with multi-coloured smoke bombs bursting from an  Olaf Breuning installation and then a drum line and a popping of pink and grey pom-poms and silver sequins: The Kansas City Marching Cobras. 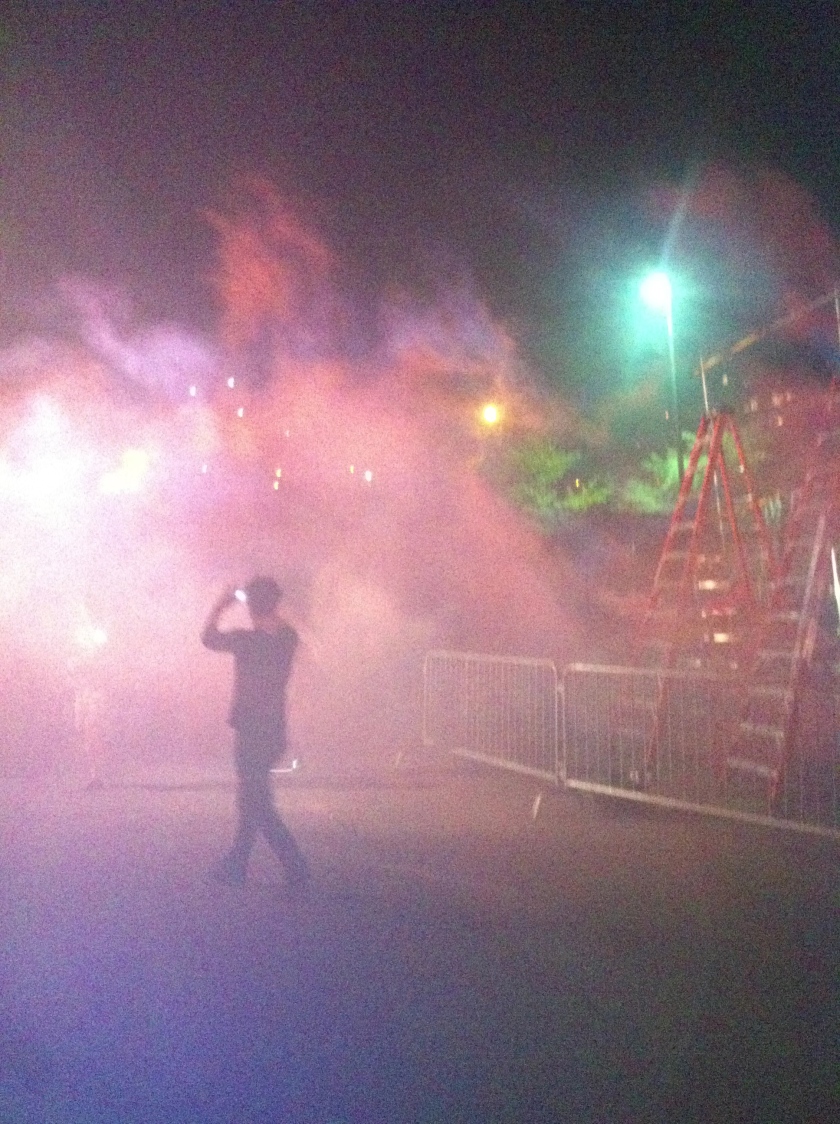 While guests (the show was sold out but not crowded) explored the installations, including a yellow Ernesto Neto yurt, and Liz Glynn explained the theory of relativity in her black yurt; No Age, Free-Kitten member, Yoshimio, Hisham Akira Bharoocha and Ryan Sawyer; and Ariel Pink’s Haunted Graffiti played on the stage in front of a bold film backdrop running shorts from the likes of Yayoi Kusama and Nicolas Provost, whose spliced up film of endless cinematic kisses was my favourite.

The night ended loudly: Suicide. A band that, given the singer, Alan Vega, is 75 years old, I never thought I’d see live. Vega stumbled on, cane in one hand, drink in the other and screamed into the mic; Martin Rev, in shiny vinyl trousers, palmed and hammered the synth. Pretty damn delightful.

“The train system runs across the American landscape like untapped arteries,” Aitken wrote in an email. “Much of our journeys have been replaced by interstates and highways. I was interested in using the train to become a nomadic broadcast tower, broadcasting new and experimental culture while tapping into unknown and amazing creators from the locations in which the train stops.”

2 thoughts on “Station to Station”