The Nile flows northward and so when you travel down the Nile, you are in fact going North. This is why the south of Egypt is called “Upper Egypt,” and is one of the ways that you have to turn yourself around when travelling through the country.

There is certain gravity to sailing along the Nile. When I stepped onto the little sailboat, or “felucca,” in Aswan, I was beginning a journey similar to one taken by such weighty figures as Herodotus, Caesar, Churchill and Twain. When Gustave Flaubert and Florence Nightingale both made the trip, though not together, in November 1849, it proved a turning point in their destinies: the Nile inspired and transformed them, the disappointed writer and conflicted nurse, into the people they were poised to become. Together their experiences along the Nile produced detailed letters, copious notes and, a few years later, Madame Bovary.

My own note taking had so far centered on criticisms of my travel companions.

I was in Egypt on a three-week trip sponsored by an adventure tour company. I reacted to the news that I had been selected for the all-expenses-paid trip first with delight then with trepidation that this was with a tour group. See, I had never willingly been part of a tour group in my life before (mandatory childhood vacations don’t count). Being fiercely independent and slightly anti-social, I had always elected to travel alone: from my first solo trip to Japan at 19, to crossing South America in my twenties and Eastern Europe at 30.  The few times I tagged along with other travelers, whether also solo or in groups, it had often ended awkwardly – like the time when I was so tired of my Laos travel buddy that I quietly left our shared bungalow in Vang Vieng and headed back across the border to Thailand.

This section of the Egyptian trip was described in the itinerary as “extremely relaxing.” After two weeks of a relentless grind of tour buses, desert convoys, pre-dawn wake-up calls, merciless touts and street harassers, I felt that I deserved some extreme relaxation; but I worried about the confinement and forced intimacy necessitated by the felucca. 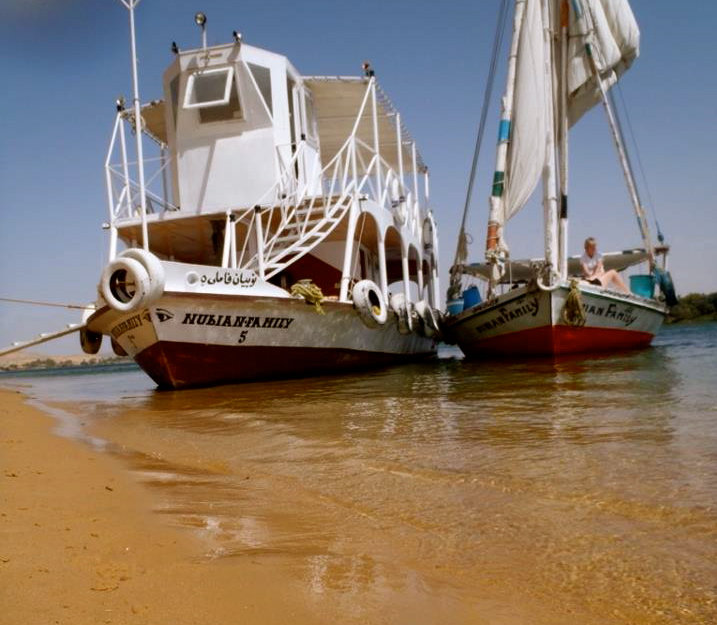 Our felucca at rest on the Nile.

Our living area was essentially a large mattress where we all slept toe-to-toe in sleeping bags and under a protective layer of bug spray. With nowhere to go, time was marked only by meals: the eating and preparation of. We would barely be finished hunching over our breakfast bowls when the cook, a Nubian calling himself “King of the Nile,” would begin lazily chopping up vegetables in preparation for lunch.

On the first afternoon, within hours of setting sail, a familiar noise started up: the ringing drone of street harassment, except this time it was coming from the riverbank. I looked up from my book and felt at once annoyed and impressed at the young men’s capacity for sexual harassment even at the distance of a river’s width. A boy who couldn’t have been more than 10, yet apparently already fluent in the language of harassment, accompanied them. Our felucca bobbed painstakingly slowly along. Our tour guide, Ahmed, who kept talking about “group dynamics,” tried to distract us with a game of cards. I pulled the sleeping sheet over my head but the noise was replaced by the nasally sound of the Australian woman’s voice. She talked incessantly and in generalisations about the many countries she had visited, and summed each one up with a simple and shallow line: Kenya is like this; India is like that. Scribbling down my irritations were all I could do to keep them from showing.

By the next morning our group dynamics looked set to coming crashing down like a house of cards. The older Englishman was the first to get up; he had been woken at dawn by the call to prayer and had spent the last few hours getting worked up about religious doctrine. Ahmed made the reasonable argument that he might have expected this in a Muslim country, so he moved on to complaining about the design and efficiency of our boat.

“There’s not even anywhere to stand up and walk around,” he began. “If it were up to me, I’d take out this part, make this part lower and use that part as a baggage storage area. That way we’d have more room.”

He also had concerns about not making it to Edfu on schedule.

“It’s going to be like this all day.” He tutted, looking out at the river.  “Just tacking into the wind”.

He had a point, the spot where we set sail yesterday afternoon was still in sight, but it sounded like a small child’s nagging, “are we there yet?” In truth there is no “there,” on a felucca, the journey is the destination.

Despite the availability of more modern, efficient alternatives, the felucca remains the primary means of transportation along the Nile. Mostly, however, they are used to ferry tourists on trips that range from a few hours to a few days. Our felucca sail was ostensibly a means of getting from Aswan to Edfu, but the journey, rather than the temple town of Edfu, was really supposed to be the destination.

By the afternoon our guide had started disappearing into the boat’s one tiny cabin and pulling a curtain across the entryway. His patience had been commendable for almost our entire trip. Only once did he slip: a couple of days earlier when, after we had been sitting at a police checkpoint for close to an hour, he chastised us for complaining. “You should have expected this,” he said, voice cracking with what I imagined to be disappointment that he really had to go through this with yet another group of tourists. “Being in Egypt at a time like this, you should have expected these things.”

On the third afternoon I saw my chance: a visit to Kom Ombo Temple. Ahmed recited the required historical details then slinked off to the side for a cigarette and phone call, leaving us to wander freely around the area. The temple was deserted thanks to an ongoing political uncertainty and threat of unrest that had resulted in a tourism industry that was functioning, at best, at fifty percent of the norm. We had the place to ourselves.

I made my way to the back of the complex, out of sight of the rest of the group, and began to walk. I walked and walked, smiling as the muscles in my legs began to loosen and the knot in my back untangle. Finally, I could relax.

I felt the light weight on my shoulders first, a scarf thrust onto me and pulled around my neck. The man holding the scarf was trying to sell it to me apparently through strangulation. He kept talking and pulling one end of the scarf as I tried to pull the other in the opposite direction. He was apparantley trying to sell me the scarf through strangulation but, rather than wearing the usual tout’s grin, he looked angry. I had learned the requisite Arabic phrases for deterring touts, harassers and general annoyances but when my throat, now free of the scarf’s grip, produced words they were incomprehensible even to myself.

For the first time on the trip I wished for the presence of someone else. At that point that I heard a noise from behind, it was the Australian girl yelling at the tout. In my confusion and didn’t catch what she said or did, but within seconds the man had gone. I was left feeling gratitude and a sting of shame.

From the point when I learned to appreciate my travel companions, I started to think about them less. My notebook from the last day on the felucca journey onwards is filled with details, thoughts, sketches: Egypt. As it should have been from the beginning.