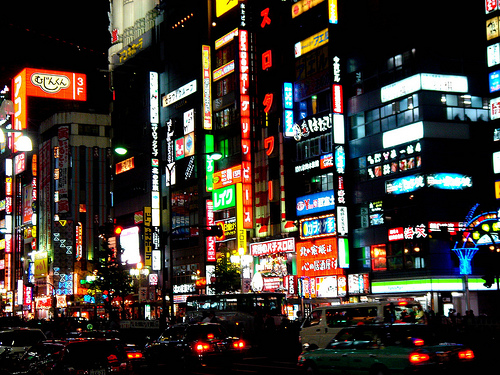 I had this piece on Richard Lloyd-Parry’s book about the murder of Lucie Blackman published at Matador recently.

I was a little concerned about the editing, in which my introduction was just lopped off leaving the reader with a book review that doesn’t introduce the topic of the book. Readers familiar with Lucie’s name will do fine without an introduction, but for anyone else: Lucie Blackman was an English woman who was murdered in Japan while working as a hostess in a Tokyo club. Her accused murdered, Joji Obara was found guilty of multiple rapes, a murder, and of the disposal of Lucie’s body, but not of actually killing her.

The name of Lucie Blackman frequently comes up whenever I talk about hostessing in Japan. We worked at the same club, not at the same time but the same era; we were the same age, and both British. The flurry of media attention when she disappeared inspired in me a selfish frustration that my secret wasn’t a secret anymore. My story about working in “a bar” in Tokyo became increasingly implausible with each breathless report about the “seedy Tokyo underworld” that foreign girls were “helplessly lured into” (according to the gutter press.)

Parry’s book was one of four I have read in the past year or two that take Tokyo’s shady nightlife business as its topic — the others are Tokyo Vice by Jake Adelstein, Roppongi Crossing by Roman Adrian Cybriwsky and Illicit Flirtations by Rhacel Salazar Parrenas. All are refreshingly free of the sensationalistic writing that had characterized almost everything I had read about Roppongi, hostess clubs and the women working in them — like this book Inside the Shocking World of Tokyo Nightclub Hostessing (serialized in the Daily Mail, natch) that genuinely and without irony asks if Lucie’s murder was “exquisitely Oriental.” Like Susana Jones in her rebuttal to Campbell’s book, I had grown tired of representations of Japan and the Japanese and sex in Japan as weird, sick, crazy, something to to poked at, examined — as if those things are so clear cut in any other country.

Again, something was lost in the editing of my piece, but I hope that the point made it across. Sorry, Clare Campbell et al, but after several years of Tokyo nightclub hostessing, I can genuinely say there was very little “shocking” about the job that Lucie and I performed. The truth of her death was, as Parry writes, “sad and mundane.” She was “very, very unlucky.”

14 thoughts on “The Fate of Lucie Blackman”